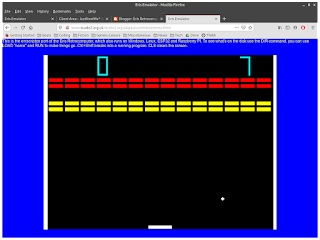 So I decided with a very simple game which doesn't need anything difficult - Breakout. It's modelled on the "Video Pinball" machine's version, which is fairly close to the original arcade.

It's entirely BASIC. The only change I made to the BASIC interpreter/Kernel is to allow the text drawer to scale, so I can do big letters easily .... admittedly they look a little blocky.

I did find a bug though, not fixed yet. You can't use Ctrl+Space , which is the break combination, to break out of a get$() (and probably not WAIT, INPUT, GET() as well).

I'm going to build and upload at the end of the day, UK time, as there are now four versions ; Windows, Linux, ESP32, emscripten . Most of the work is actually done on Linux and the other two are just built occasionally.